Hi, everyone – Sara here. I’m a former student of Nicole and Giacomo’s (now an incoming graduate student at the University of British Columbia in Vancouver), and I’ve been working in Ulithi with the OPOR team for four years now. This year, I had to leave a week earlier than the rest of the visiting team. Since I’m back before them, I wanted to give a quick update to let you know how everything’s going.

It’s rough out there after the typhoon, but we were pretty comfortable. We stayed at the Ulithi Adventure Resort (where we usually stay). A few of the rooms have air conditioning, but none of them have running water. The hose was turned on during certain periods each day so we could shower and fill up the water buckets for flushing the toilets. The islands have desalination machines for drinking water, so we were okay there, and we had plenty of food. Many of the doors had plastic sheeting over where the windows used to be to keep the mosquitos out.

The effects of the typhoon are staggering. The majority of the homes on the islands were at least damaged, if not completely destroyed, so our accommodations were pretty luxurious compared to the current living conditions of the people in the communities. One of the most obvious differences was the shade we had at the resort, which kept us out of the sun – the loss of trees on most of the islands is making it harder for Ulithians to avoid getting sunburned and is making the overall temperature on the islands much hotter than normal. Some of the vegetation is just now starting to come back, but the trees will take longer.

With cleanup continuing and rebuilding just beginning, Ulithi still needs a lot of support. If you haven’t already, please consider making a contribution through this fundraising page set up by one of this year’s Youth Outreach Plan students, Cole Charlton. The funds go directly to the Ulithi Falalop Community Action Fund, so the communities have complete control over how they are spent.

The youth team is doing a really fantastic job, and it was a lot of fun working with them. The Ulithian and American students teamed up to collect data for the science team, and are having a lot of fun in the process. They’ve also spent some time on land to help with community cleanups, gardening and replanting, and even spent a day making a batch of coconut oil. (Check out this awesome video of a song they wrote and performed for me on my last night in Ulithi!) Next year, OPOR will continue our partnership with BluEcology to offer the program again, and there is already a waiting list for interested students. Check out the BluEcology webpage for more information.

This week, the science team will finish their data collection and meet with the communities to share some preliminary results. We’ll post more from this year’s work, including hopefully some posts from the students themselves and some updates from the science team’s work, once the visiting teams have returned. 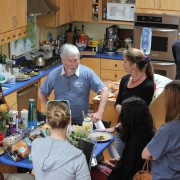 Notes from the science team
Scroll to top