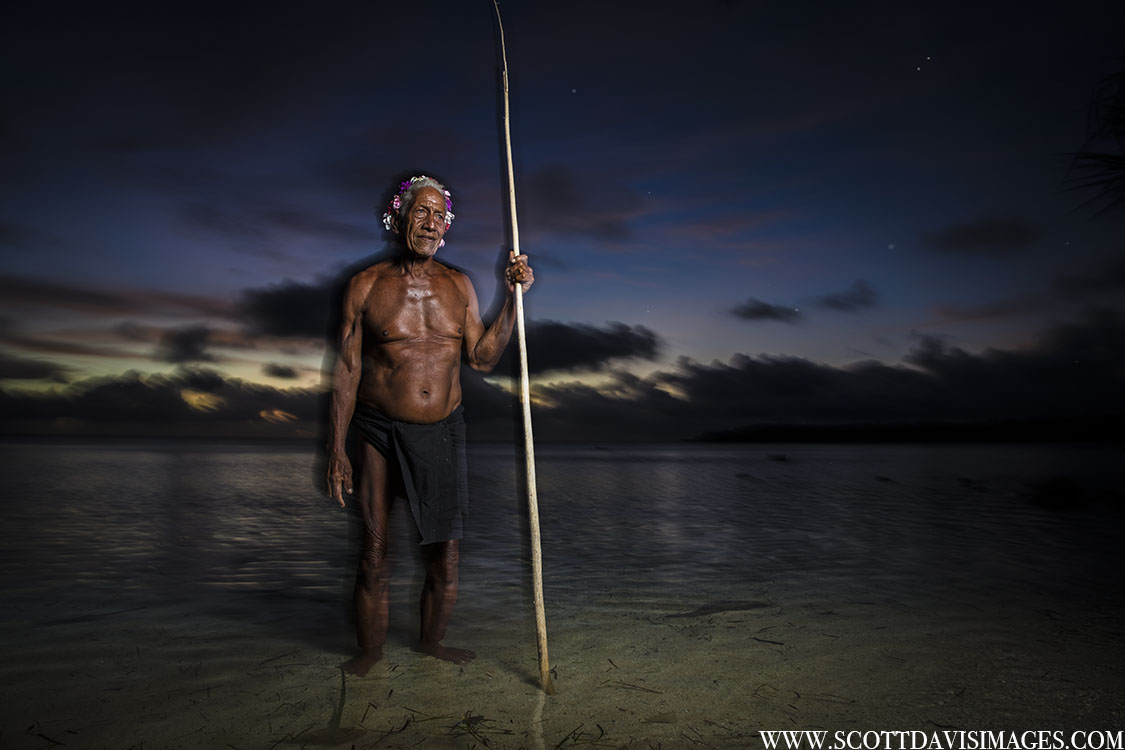 Ifaluk, with a population of around 500, is among the most traditional of the outer islands in terms of how they fish, manage, and govern.  It is steeped in more superstition than many others as well.  They had heard of our coming, but were unsure when…

The Atoll has a very shallow entrance, so the Truk Master had to anchor outside.  The only area shallow enough for an anchorage is on the weather side – East/North East, so the boat rocked and rolled, and small boat operations were challenging…We had to stage the small boat operations from the side deck – wet and pitchy.  But oh…was there a treat waiting for us underwater. But first, as it turns out, we crashed one of the most important celebrations of the year – graduation! The graduates were adorned with beautiful lava lavas, and ‘thus’ for the boys.  Their bodies were rubbed with turmeric, and the beautiful yellow color and aromatic smells added to the festivities.  Magul (Jr.) was whisked away and dressed in turmeric.  He was asked to be a speaker at the graduation – which he did graciously. The graduation was a big event, as they are out here.  Graduates are acknowledged, praised, and cheered.  This was the 8th grade graduation, and the elementary kids.

We went diving at Ifaluk and found beautiful reefs.  These reefs are all fished (although portions of them are protected at various levels).  Yet the diversity is high, and on some of the reefs biomass is very high too.  We did definitely see some areas and some atolls with signs of more direct pressure than others. Our diving operations are tricky with only one small skiff, but we’ve had great support from the islands which lend us a skiff and a guide to navigate the channels and cuts, in exchange for fuel we brought.  Ifaluk however does not use its motor boats generally.  The chief has forbade their use except for emergencies – favoring sailing canoes instead.  Same for spear guns, which are banned.  This meant we had to juggle 11 divers on one small boat – meaning we could not all dive at once! We’d forgotten that today is Sunday…with, of course, church services on the island. Therefore, after breakfast on the ship, we put on our nicest boardshorts, our cleanest shirts and lava lavas for the women.  We took the ship’s launch to shore to attend mass. They don’t have a priest on the island, so it wasn’t mass in the strict sense, but the little church was well attended and the service was earnest. Rather than lots of readings, there were words and even chants from the people in attendance – mostly the women.  The singing, as always, is fantastic.

Afterwards, there was a brief community meeting outside with men and women from the island. Magul (Junior) spoke and translated and both Nicole and Peter talked about the work in Ulithi and how we felt the program might be of interest here on Ifaluk. Then, Nicole and Heidi split off to talk to the women and Magul and Peter went with the men to one of the canoe houses. Ostensibly, we were there to tell them about our work, but the reality was they taught us an enormous amount about taboos and how that figured into their traditional management, old fishing techniques such as kite fishing for needlefish and how to prepare a gorge for catching flying fish—even some mention of black magic. The atoll here is exceptionally beautiful with three large islands making up two sides of a rough square with the lagoon, of course, in the middle. There is a narrow passage between two of the islands on the SE side with what looks like a decent left (break) on the eastern side of the passage. The swell isn’t sufficient to clean up the surf, but it doesn’t look like it would take much to be quite a good break. There are at least two fiberglass skiffs on the island, two with outboard motors, but their use is reserved for emergencies only—all other fishing is done from their traditional canoes. Watching them beat into the wind, coming back from Woleai with a full rainbow arching over their sail is an unforgettable sight.