Helping the People of Ulithi in this Rapidly Changing World 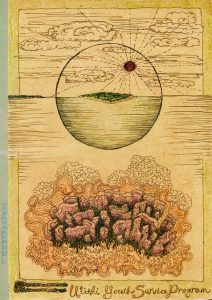 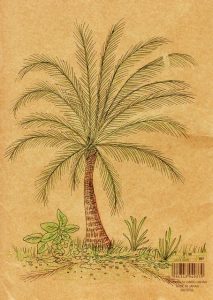 Above: a couple of the drawings that I created during my stay in Ulithi The island on the left is Falalop, the tiny island that I lived on for two weeks in June. It is one of the four inhabited islands of Ulithi Atoll, 360 miles southwest of Guam (check Google Maps for some scale and the location). This atoll is unique; it has a loaded history, including occupation by the U.S. Navy during the final year of WWII and being demolished by a category fivetyphoon in 2015. These left big scars on the ecosystem and its culture, causing some complex problems and relationships with the rest of the world.

With funding from the UCSC Norris Center Art and Science Residency, a Norris Center Student Project Award, and from One People One Reef, I went on a life-changing expedition to these islands to conduct field research for One People One Reef. One People One Reef (OPOR), based in Santa Cruz, was formed to help the community in Ulithi develop a sustainable resource management plan. All research is conducted for the people of Ulithi at their own request, and is helping with some of the issues that they face in this rapidly changing world. OPOR recruited me, along with eight other American students and ten Ulithian students, to help with some of their projects. I play a larger role in the creation of illustrations for the National Geographic funded project on traditional storytelling and taboos, directed by Nicole Crane (Cabrillo College) and Giacomo Bernardi (UCSC). Of the five main issues that this trip focused on, I will highlight two below: 1) how traditional storytelling and taboo have scientific value, and how this allows youth to reconnect with traditional fishing management, and 2) how ocean debris (trash) is affecting the lives of islanders, where it is coming from, and what we can do about it

People have lived sustainably on these islands for hundreds, maybe thousands of years. However, in the last few decades, there has been a rapid shift away from traditional fishing, farming, and storytelling practices. For example, young generations often disregard old taboos against fishing in certain places during certain times of the year. On the surface these taboos might not seem important, but with a little digging and scientific research, we see that these taboos help prevent overfishing. Healthy fish populations are key for providing enough food for the people.

Like the example above, much of OPOR’s research suggests a solution of moving back towards traditional ocean management. Although it is unrealistic to stop using motor boats and electricity, there are compromises that can be made that will help to restore the all-around health of the atoll to what it may have once been.

The ocean debris project for me was the most eye-opening aspect of the trip. When I walked down to the beach for the first time after we arrived, I expected sand, corals, coconuts, the occasional water bottle, but I saw HUNDREDS of water bottles, flip flops, lighters, caps, toothbrushes, buoys, cans, and fishing nets.

Once the garbage washes up, it can’t go anywhere; there are hundreds of miles of ocean between Ulithi and the nearest trash or recycling facility. The only thing to do with the garbage is bury it or build things out of it, but there is only so much space on these tiny islands.

For the recently titled Ocean Management Mapping & Management Initiative (ODMMI), we counted up the different kinds of trash found at sites around the islands, attempting to figure out where it’s all coming from. At this point we believe the majority of the trash washing up in Ulithi is coming from Asia with some coming from nearby islands. We’ve only just started this project, but the ultimate goal is to have a baseline set of data to show people, to form a plan for how to solve this problem. One possible solution would be to send out ships to bring the trash to facilities on the big continents.

Now, I must thank these beautiful people for taking us in with open arms. In the past this atoll and its people have been taken advantage of by many. Yet, we were greeted with hospitality and kindness. All of my respect goes to them.

They allowed us to participate in their lives and their culture, teaching us about their food, music, weaving, plants, and all kinds of other things. I’ve learned so much and it’s been such a privilege; I truly can’t express how grateful I am that I got to become friends with such extraordinary people. Together we can help each other grow.

I also thank the Norris Center, which has continually provided me with the means to make the most of my time here at UCSC, more than I ever could have imagined. I would never have been able to go on this expedition had they not invested in my illustrations for the storytelling project. Sa hachigchig! (thank you, in Ulithian!)

Over the next few months I’ll be working on storyboard-like illustrations to accompany the stories and taboos that were collected this summer. Once the project is done, I’ll write another blog post with more detail on our approach to collecting these sacred stories respectfully and how we are giving them right back to the community for their own purposes and education.

All images are copyright of Charlotte Grenier.

Donate to our Youth Action Project Fundraiser!
Scroll to top